In the years leading up to and after 2015, corruption was the dominant issue in Nigerian public debates. The idea that Nigeria’s main challenge was tackling corruption was so widespread that it propelled Buhari into office. However, in the last couple of years, the issue of insecurity has taken centre stage. This is not because corruption has been resolved – it hasn’t – but because social issues like corruption, insecurity, poverty, and health crisis are the visible cyclical symptoms of a deeper malaise that we have refused to address: social and political inequality. Corruption and insecurity exist because of the pervasiveness of inequality in our socio-political fabric.

In short, almost every problem in Nigeria comes down to one kind of inequality or the other. Unaccountability, patronage, and corruption are derived from the inequality of status between those in authority and those under authority. Rape and sexual assault are often products of gender inequality. Social violence and many economic crimes are often consequences of poverty: the unequal access of opportunity to public goods. The distribution of public service  is unequal: one citizen can summon a minister; the other citizen cannot even pass through the gates of the ministry.

Given this state of unconstrained inequality, what we call our democracy is, in reality, just a systemic hierarchy of power and oppression overseen by a militarized executive government. In this system, the rights and dignity of individual Nigerians are not determined by our inherent identity as human beings, but by our cumulative identities and status within the system. This is why every issue starts with an ego tussle and ends with a struggle for power: Do you know who I am? 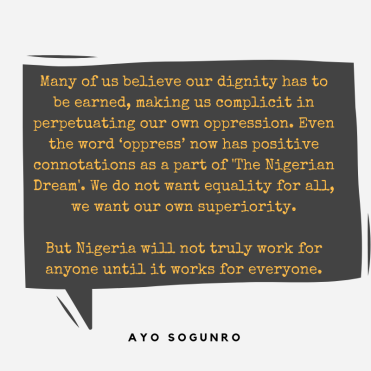 The message of equality is not new. The first line of the 1948 Universal Declaration of Human Rights – the most powerful and universally applicable human rights document –  states ‘All human beings are born free and equal in dignity and rights’. Still, because of the way we have all been socialised and educated, many of us believe that our dignity has to be earned, making us all complicit in perpetuating our own oppression. Even the word ‘oppress’ now has positive connotations as a part of ‘The Nigerian Dream’. We do not want equality for all, we want our own superiority. But Nigeria is not going to work until we address inequality and tackle the hierarchies of power and oppression. This country will not truly work for anyone until it works for everyone. Or, as Peter Tosh says, ‘I don’t want no peace. I need equal rights and justice.’

The most effective way to ensure equality for all is through a transformative constitution. This requires us to adopt a constitution aimed at transforming our society into one where every citizen has equal protection under law, a constitution that emphasises equality, human rights, and human dignity as its fundamental political philosophy. It is not enough to simply fight individual cases of corruption, rape, police brutality, or the abuse of power, we must change the whole system.

Insecurity is the current issue in Nigeria. But it is an issue that stems from our unwillingness to treat all our ethnicities, religious groups, and individuals as equals under law in the conduct of their affairs. Every problem in Nigeria is connected, but the solutions we think up are discordant. Every hashtag we trend, every violation we condemn, and every issue we crowdsource has to end in this question: when are we going to change the overall political system?

Originally published here in slightly modified form for my monthly column for The Guardian. 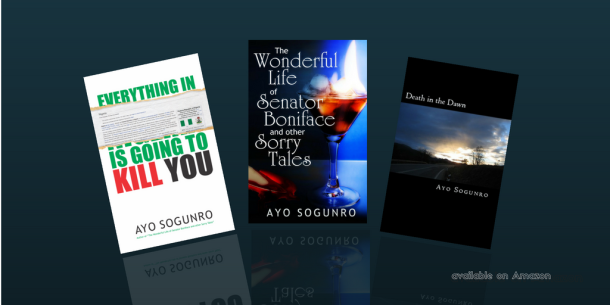