Today, we will talk culinary things and fine dining: where to get good food, how to eat good food, and most importantly, how to avoid paying for good food. 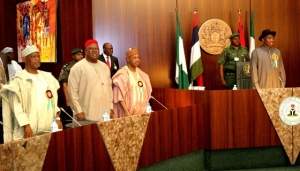 And  how to enjoy good food in a N2.2bn banquet hall specifically approved for that purpose.

In the tradition of vain imaginations and inane glorification that exists in this country, a lot of Nigerians think Federal Executive Council meetings are a gathering of serious men and women who meet every Wednesday to critically discuss how to fix national issues and solve existing problems in a sane manner—like an episode of The Apprentice, except without an asshole Donald Trump messing up the works. Sorry to burst your bubble, but FEC meetings are actually not that serious. Not in the way you think, anyway. 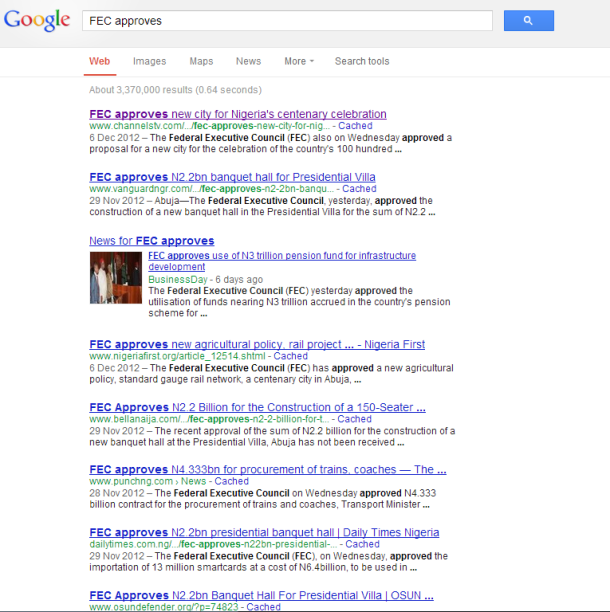 Son, whatever you do in life, never ever Google “FEC approves”. The shock will destroy you forever.

Now let’s leave the FEC for a moment. I know you’re hooked on reading on, but take a look away from your screen and ask any random person to give you three problems plaguing Nigeria and how these could be fixed. Any three problems, there’s a long list to pick from: corruption, insecurity, economy, infrastructure, health care, education, power, agriculture, oil and gas…

…all those Arsenal fans.

Simple exercise, right? Any Nigerian can give you, not just the problems of the country, but also a fair, if crude, idea of how these problems can be fixed. So why do we still have these problems around? Folks usually assume this is because the government has no clue on what it takes, and these nice folks are quite happy to educate the government on the way forward. But, I’m sorry sweethearts, that’s a fucking wrong assumption. The government absolutely knows every in-your-face, down-and-out, expert-approved, consultant-sanctified, blueprinted, mapped out,  long and short solution to the problems of the country. They know it far better than you and I can theorise. But they are never gonna be inclined to use this knowledge. Trust me on this. Why the fuck not, you ask me with exasperation.  Simple, because the real goal of everyone in government is to find food to eat for the day.

This is everyday life in Nigeria. The life of most Nigerians continually revolves around choosing between  having food to eat in the short term and consequently postponing a pressing problem, or going hungry and fixing the problem.  Take a look at the now cliched scenario of the N20 police bribe. The problem in that scenario is corruption, but the need common to the parties in the scenario is that of food.  You can’t quite blame the lean looking policeman for disinterest in fixing corruption, and interest in eating. He joined the police not to secure lives and property–but to get a job to eat. Also, you can’t quite blame the danfo driver who is not inclined to fix corruption either, but wants to pursue his daily bread. The market woman is out to find money for food, she is not in the market to fix environmental problems.  The lawyer needs money to be able to eat, he did not nearly sell his soul to raise the law school fees because he wants to fix the legal and judicial system. From the professionals who zoom out in cars in the mornings to the labourers on the field—everyone is looking for a means of livelihood. Bed and breakfast. Food to eat. No one leaves the house and says, today, I want to go out and solve a damned problem.

“Are you kidding me. I resemble your mama?”

Now, let’s get back to that unserious FEC meeting. Imagine in the meeting, a fresh Minister for Works,  excitedly outlining a proposal to construct a super metro system. When he is done  with his yarn, the President asks him  a few questions. (1) How long would the project take? Our Minister answers: 5 to 6 years. (2) Who are the proposed contractors? Some French engineers. (3) Who will put up the project money? Some Nigerian and international banks. (4) Will there be any profit? Yes, of course, from the commercial proceeds of the completed metro system. (5) Who will make this profit? Well, the Minister says nervously: the same banks that put up the money. (6) How, can we get our people into the deal? Errm, no way sir, this is strictly project finance, only the investors can make any money in the long term.

“Barth! What the hell are you saying?”

The room goes quiet as the President stares coldly at the Minister before he lashes out: “How the fuck do I explain to the contractors in the Party that I approved a multi-billion Naira project they cannot benefit from? Get your French engineers  to construct a defense for me, asshole! Do you think we are here to joke around?”

“Do you think I entered Aso Rock to count the bridges in Abuja?”

And here’s the moral for today: the President, his ministers and the rest of the government are as Nigerian as you and I. They know the problems, they have the answers and they know how to implement them. But few problems can be fixed without someone giving up, or suffering, something. The elected official has no inclination to give up the perks or endure the suffering.  Therefore, the government will only try to fix problems that excludes the government from the pain of the fix—and too bad if the masses have to suffer that pain. On the other side of the battlefield, and especially in these days of Twitter and Google, the masses are beginning to understand the long con, and since they want to eat just as well as the government,  they will also resist these kinds of one-sided fixes. So the country doesn’t progress, and things remain the same. And that’s what Fela calls “stalemate”.

Naturally, the masses are not going to give up their hard-earned pleasures to please the government’s selfish projects. And that’s the real problem with Nigeria—no one wants to suffer the fix to a problem while someone else gets away with the food. That’s the real issue: not corruption, not insecurity, not the  economy, not infrastructure, not health care, not education, not power, not agriculture, not oil and gas.

Not even all those Arsenal fans.

Of course, the ideal solution is for all of us, government and governed to endure the pain together. But who the hell is gonna start first? The general consensus of the masses is: let the government stop its selfish spending and selfish “fixes”, and show a willingness to trim its bloated belly to a reasonable size, then the masses will be willing to share the pain. Its not necessarily the nicest ideology, but folks wanna eat too. So, your move, government.

P.S. For our readers who look out for reference links, sorry for the absence today. Meanwhile, here’s something  for you.

30 thoughts on “IDLEMINDSET | THE FOOD, THE WHOLE FOOD, AND NOTHING BUT THE FOOD”