Last week, the United States Ambassador to Nigeria opined that social injustices and a disregard for the rule of law were much more damaging issues in Nigeria than the theft of public funds. Although this statement made headlines, this thinking is not novel. For example, back in the late 1980s, Dele Giwa once described Shehu Shagari’s mismanagement of national affairs as ‘the single most destructive element in the history of Nigeria, a crime, in a political context, worse than graft.’ But, today, it seems to require a strenuous effort for many Nigerians to understand that corruption is just one of many problems that we need to tackle. 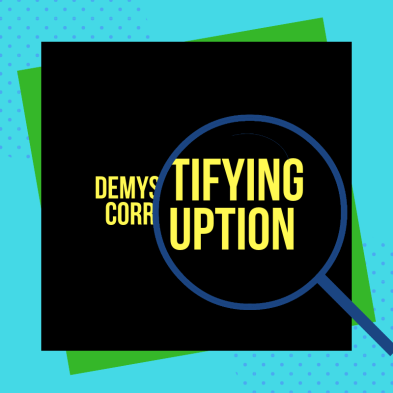 Over the last twenty years, politicians themselves have touted corruption as the most intractable challenge of the Nigerian state. In 1999, President Obasanjo declared that corruption was ‘the greatest single bane of our society today.’ By focusing moral panic on corruption, Obasanjo was able to distract from other challenges, including those embedded in the nature and structure of the Nigerian state. Consequently, a new generation of Nigerians grew into social awareness with the impression that corruption was the principal enemy. When President Buhari rode on the wave of this social psychology into office in 2015, previously critical issues in public discourse such as continuing military involvement in democracy, executive autocracy, centralisation of powers, and the repression of minorities had practically disappeared from public debates.

In the last few years, the Buhari administration has re-legitimised executive supremacy, non-accountability, policy arbitrariness, and disregard for the rule of law. The pretext for this unethical – and even unconstitutional – mode of governance is the claim (by the administration and its supporters) to anti-corruption. When this government exercises its powers arbitrarily, it justifies it as necessary to fight corruption. When Nigerians suffer the consequences of bad policies, the government explains that corruption is fighting back.

But corruption is not mysterious. We should not confuse its quantity for its quality. Its visibility and ubiquity does not make it a more dangerous phenomenon than, for example, social hierarchies and structures that create inequalities between men and women, employers and employees, or the political class and ordinary citizens. A brutish government that kills protesting citizens is just as horrible as, if not more so, than the theft of public funds. Certainly, no right-thinking person would seriously argue that corruption should be tolerated or overlooked. However, if we are to truly engage the realities of the Nigerian situation, we must demystify the idea that corruption is the supreme monstrosity.

The word ‘corruption’ itself has several meanings in the English language. These meanings imply both a broad sense in which it is used to denote degenerate behaviour or moral decay, and a specific sense in which it is used to describe fraud or theft in the use of public resources or privileges. The broad understanding of ‘corruption’ is not a reliable indicator of the ethics of an issue. For instance, genocide, terrorism, and acts of random violence can be premised on the belief that such acts will ‘purify’ a society of ‘corrupt’ influences. ‘Boko Haram’ implies a war against what is perceived as a type of moral corruption: Western education. Meanwhile, white nationalists lament what they consider as the corruption of Western culture by immigrants. In this broad sense, even human rights can be dismissed as a form of corruption.

When politicians claim to fight corruption, they are often referring to the specific meaning of the use and misuse of public funds and privileges. While this is a serious issue, it is not – by any logical measure – ‘the worst problem in Nigeria’. This is because this specific type of corruption is only just as bad as – and just as treatable as – other prevalent crimes. This demands the exercise of political will demonstrated through the institutionalisation and operationalising of an efficient and independent policing, investigating, prosecuting, and judicial system.

But our politicians – including the ones who claim to fight corruption – are not interested in building the capacity necessary for an efficient criminal justice system. Genuine capacity building requires the creation of a democratic welfare society, the enabling of a majority middle-class population, and the pursuit of an open and equal society. Genuine capacity building means less power for the political class and more for the ordinary people. Nigeria’s political leadership – especially the ones in the Buhari administration – are not interested in this type of reforms.