A couple of weeks ago, I received a bulletin email from Dr Aminu Gamawa, secretary of the newly constituted “Nigerian Bar Association Legal Profession Regulation Review Committee”. According to the email, this committee had been created to review “the current regulatory objectives and the regulatory architecture of the legal profession”. This is a good idea. I like reforms: critical thinking requires continuous improvement. It is important that we keep asking ourselves why we do the things we do—and if is there a better way of doing these things.

The LPRRC seems to have a lot of critical thinking to do. For example, it has to: deliberate on whether or not lawyers should get a first degree in another discipline; whether or not law firms should be licensed and regulated; and, quite importantly, define the role of the very mystifying “Body of Benchers” in the legal profession.

But my own grievance against the Nigerian legal profession is more basic. I am unhappy with the continued use of the medieval European wig and gown as a uniform of our legal profession. I do not think the LPRRC has been mandated to deal with this specific issue and so I have not made any submission to them. But, more importantly, this is more than just a decision for the legal profession; it is an issue that has an impact on the socio-cultural identity and political philosophy of all of us who identify as Nigerians. 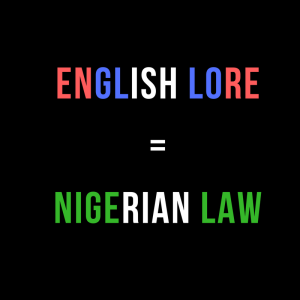 I am not arguing a case for political petulance. Instead, there is a basic scientific argument against wearing wigs, heavy dark robes and collars in a tropical environment. An Internet image search of our solar system shows that most of sub-Saharan Africa is within the area of our planet most exposed to the Sun and its consequent heat. It is, therefore, common sense that our natural attire should allow circulation of fresh air to cool the body. An understanding of our environment requires us to favour loose or light dressing.

By the same logic, cultures that have evolved within temperate regions are likely to develop warmer clothing to protect against the cold. The court dress of medieval to industrial Europe is a reflection of this natural inclination. The wigs worn by Europeans were were mostly decorative, but they also served the practical function of being an extra—or only—layer of hair to keep the neck and ears warm. Nevertheless, today, the legal profession in these countries is relying less on complicated uniforms. There are easier ways to keep warm and dignified.

Equally as important as science is the issue of identity. As the deputy public protector of South Africa, Kevin Malungu, once said about our legal systems: “decolonisation begins with removing the wigs and gowns”. Unfortunately, Nigeria—and a number of other African countries—has continued with the colonial legal traditions decades after independence for no clear reason other than a misguided sense of legal tradition and dignity.

But the dignity of the legal profession is not tied to particles of colour. The dignity of the legal profession is dependent on self-respect derived from institutional productivity beneficial to the population. All the wigs and gowns in Nigeria did not prevent the DSS from breaking doors and dragging off judges like common criminals.  Respect is derived from practical value, not from symbols and emblems.

There is nothing inherently legal or dignifying about wigs and gowns. Wigs and gowns were, in diverse combinations and across eras, the attire of European aristocrats and clergy. Frankly, if Europeans had developed a penchant for wearing steel buckets, then our Nigerian lawyers will still be wearing steel buckets today and calling it dignity. Even now, the gowns of lawyers are attached with a useless sort of money pouch: because that was how it was passed down from medieval times.

Where the sun shines.

This cultural misappropriation is contributory to why we are rarely taken seriously by the Western world. The white person who watches an African lawyer prancing around in a wig and gown has a quiet laugh. We are misusing a culture that is not ours, derived from a history and an environment that is not ours. We need to step back and see ourselves objectively—as the rest of the world sees us. We are a country with a lost identity, conflicted between a desire for progress and our ties to a tragic history.

If the dignity of the legal profession is as important as our lawyers claim, then it is time to put aside the ridiculous clothing we wear. Instead, we should respect our native authenticity and diversity of attire and take advantage of our constitutional freedoms of expression. At least, we should be able to fashion a courtroom uniform more suited to our environmental condition.

It is depressing enough that innovation is rarely shown in our legal practice. That is a sad fact of the state of our jurisprudence and philosophy of law. But it is even more worrisome that the icons of our legal profession, a sector that boasts a cream of intellectuals, seem to be too unintelligent to take a firm decision and prescribe a courtroom dress that is scientifically appropriate, culturally representative and socio-politically independent.

Far be it from me to pick a disadvantageous fight with the Body of Benchers or whoever else is responsible for deciding what Nigerian lawyers and judges wear in court. But, after almost sixty years of static post-colonial practice, I am inclined to think that a good dose of common sense is required at some of those levels of legal control. Hopefully, the Legal Profession Regulation Review Committee will trigger some critical—and creative—thinking.

But this is just one of the many existing problems traceable to our colonial history. When we are have tackled the colonial attire of our legal profession, maybe we will then be ready to address our insistence on the use of English as the language of education—in a country where English is not the first language of millions of new students—and its obvious connection with the high illiteracy rate, and underdevelopment, in the country.