In 2007, Wole Soyinka wrote the very scathing essay: “The Crimes of Buhari”. In the essay, Soyinka reviewed General Buhari’s 1985 regime, and highlighted the features of that era: Buhari’s imperial attitude; repression of free speech, selective enforcement of decrees, and partisanship towards the core political elite. The most damaging accusation against General Buhari was his disdain for human life. Hence, “In the case of Buhari…he has declared in the most categorical terms that he had no regrets over this murder and would do so again”. 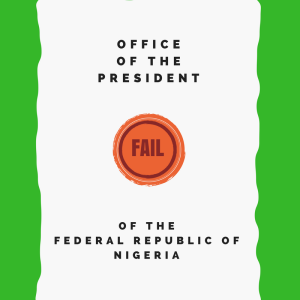 Today, those words—and the entire article—haunt Prof Soyinka and those of us who, aware of our history, did not push harder against the re-emergence of Buhari. I know of many young people who chose to vote for Buhari only as a lesser of two evils. This is how I chose too, and I plead fait accompli. He has not justified these votes. I am not hesitant to say President Muhammadu Buhari is guilty of gross misconduct in the performance of the functions of his office.

Of course, it is futile to talk of impeaching a Nigerian president. The process is complex and has many loopholes for political manipulation. Still, it is clear that a serious legislature should have hauled the president over to give an account of his office. But our legislature is anything but serious. Their corruption-infested chambers are incapacitated by the presidency’s ability to deploy the EFCC against vocal opposition. It is little wonder that a primary constitutional focus is on expanding the immunity clause.

“The Crimes of Buhari” may now be ancient history, but let us now consider the gross misconducts of President Buhari. A lot of these are in public knowledge. For those who may have somehow missed the news since 2015, the people at SBM Intelligence have provided steady reports on their website. Meanwhile, let us list the allegations against President Buhari and judge, ourselves, whether these amount to gross misconduct or not.

Part B: Articles of Impeachment

I. Condoning the Shiite Massacre: That you, President Muhammadu Buhari, condoned the December 2015 massacre of members of the Shiite sect in Zaria. Over 300 Nigerians (including women and children) were killed in this attack, executed by the Nigerian Army without consequences. You have failed to prosecute the Chief of Army Staff and other perpetrators by Court Martial. You have, instead, expressed indignation that Nigerians in a procession did not clear the way for the Army general. You have approved the judgement and sentence passed by the Army on the lives of these Nigerians.

II. Ignoring the Agatu Massacre: That you, President Muhammadu Buhari, between January and March 2016 wilfully ignored persistent attacks on the residents of Agatu, Benue State and environs resulting in the deaths of up to 500 Nigerians under the watch of your government.

III. Ignoring Diverse Killings in 2016: That you, President Muhammadu Buhari wilfully ignored diverse attacks on Nigerians throughout 2016 and failed to protect the lives of Nigerians under your government. We note, in particular, the deaths of up to 38 people in Udeni Ruwa in Nassarawa State; up to 60 people in Demsare, Wunamokoh, Dikajam and Taboungo all in Adamawa State; up to 30 people in Buruku, Benue State; up to 44 people in Dori and Mesuma villages, Taraba State, and many more similar attacks against the people of the Federal Republic of Nigeria.

IV. Ignoring the Southern Kaduna Massacre: That you President Muhammadu Buhari, between December 2016 and January 2017 wilfully ignored persistent attacks against the people of Southern Kaduna, resulting in deaths of over 200 Nigerians under the watch of your government.

V. Negligence of Internally Displaced Nigerians: That you, President Muhammadu Buhari has negligently ignored the plight of internally displaced Nigerians leaving them exposed to fraud from government officials, malnutrition and starvation, terrorist attacks, rape and even “accidental” bombings by the Nigerian military without any consequences. That, instead, you applaud victory over Boko Haram without showing any care or responsibility towards the direct victims of terrorism.

VI. Shielding Corrupt Appointees: That you, President Muhammadu Buhari has wilfully protected political appointees and party members from investigation and prosecution for allegations of corruption. We note, in particular, the diverse publicly available allegations against Mr Rotimi Amaeachi, Lieutenant General Tukur Buratai, Mr Abba Kyari and Mr Babachir Lawal. We note, also, your negotiable attitude to corruption cases involving politicians in the opposition party who switch loyalty to your party. We note, however, that you have not hesitated to immediately deploy state security organs against persons perceived to be oppositional, including members of the judiciary.

VII. Economic Policy Arbitrariness: That you, President Muhammadu Buhari, has wilfully played dice with the Nigerian economy. That, almost two years into office, your government is still yet to articulate a clear and measurable economic direction. That you, President Muhammadu Buhari, allowed your personal opinion to overshadow independent fiscal policy by the Central Bank of Nigeria and thus deprived Nigerians of sound judgement. That, under your administration, fiscal nepotism and selective allocation of foreign exchange has become the standard.

VIII. Social Policy Hypocrisy: That you, President Muhammadu Buhari has negligently failed to lead by example despite your call for a more disciplined country. That, for example, the line items in your budget continue to be grossly inflated and highly unusual. That your several vacations abroad do not reflect the economic realities of the country. That the slogan “Change Begins With Me” is yet to apply to your personal attitude to and dealings with issues affecting Nigerian minorities, women, and young people.

“Human life is inviolate”, Soyinka wrote. “The right to life is the uniquely fundamental right on which all other rights are based.” “The Crimes of Buhari” may now be history, but we should consider what the present attitude of the government to Nigerian lives means for our future. Is the future salvageable or are we already doomed to repeat the past? Time is telling.