Several days ago, on a trip from the Lagos mainland to the Lekki peninsula, I saw a sprawling heap of trash by the Obalende junction. It seems absurd to call garbage ‘unkempt,’ but this one did look neglected. It was even more surprising that the waste oozed, spilled and piled around and out of several shiny trapezoid garbage bins. Printed on the sides of the bins were the words ‘CLEANER LAGOS,’ self-glorifying in unconscious irony.

I had been away from Lagos for most of 2017 and so did not know that the state’s waste management authority – LAWMA – had been downgraded (or upgraded, depending on your perspective) from providing waste disposal services to a purely regulatory role. Meanwhile, the state government had partnered with a foreign-owned company to handle LAWMA’s services. If newspaper reports are any guide, many Lagos residents do not think this a sensible policy. 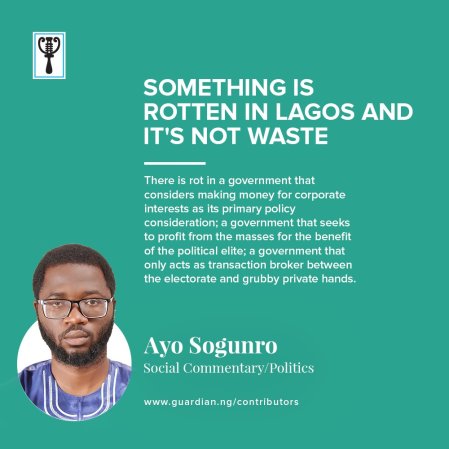 Naturally, the state government has refused to admit misadventure. Instead, it has alleged sabotage and other humdrum rationalisations. Still, the entire scenario remains curious. Constitutionally, waste disposal is a primary function of the local governments. Not only has the Lagos government usurped the role (and pushed out small businesses in the process), it has also ultimately abdicated responsibility to big business.

This unnecessary ‘fix’ of the waste collection and disposal system is just one of the many instances of the growing Corporatocracy of Lagos state. The Otodo Gbame evictions sacrificed the people for estate developers. Similarly, Lekki toll sacrificed the people for corporate concessionaires. My personal grievance is with Freedom Park in Lagos Island: supposedly tax-funded and sheltering paying commercial tenants, yet it is anything but free to public access.

Economic classism is the underlying norm in Lagos policies.

It seems to me that the Lagos state authorities have finally lost their identity as a government and fully morphed into a corporate board of directors. The state is one huge market, and the government seems more concerned with maximising profit from market gaps than in providing functional public services and utilities.

There is something rotten in the state of Lagos. And it is not just the undisposed waste.

READ THE REST in the originally published article here in my monthly column for The Guardian.

Also, watch my interview on this and related issues with Sahara Reporters:

Follow Ayo Sogunro on WordPress.com
Follow @ayosogunro
Because I spend most of my year outside Nigeria, I am not always able to contribute to ongoing public debates via mass media platforms. However, this morning by 11am, Nigerian time, I will be on @happeningsradio to discuss governance and sociopolitical issues in Nigeria with @eniolathegreat Eniola Awokoya. Tune in online and join us if you can. #Governance #Constituionalism #Transformism #Nigeria
Last week on @wfm917, sharing informed perspectives on 'Chapter 4' by @tiersnigeria. Not pictured, our host: the award-winning journalist @kikimordi and my co-guest, the award-winning writer and multifaceted lawyer @_achalugo.
Tune in to Women Radio 91.7 @wfm917 at 3pm Nigerian time tomorrow to join @kikimordi and I as we critically examine the problem of discrimination on the program 'Chapter 4': Brought to you by @tiersnigeria. #equality #genderequality #humanrights #lgbtq🌈
Why is Nigeria just so...Nigeria? 😡 If you want to understand nuances of the history, design, political philosophy, and underlying jurisprudence of the Nigerian Constitution and how these affect our democracy, and how you can engage these as a human rights advocate, send us an email to attend this free class in Lagos, this January.

Error: Twitter did not respond. Please wait a few minutes and refresh this page.