The advent of election season in Nigeria is, for a sane observer, a tortured exercise in the suspension of disbelief. For those few months, the drama of political convenience opens across the country, wiping off whims of informed politics. A cast of zany characters determined to ingratiate their way into favours with Aso Rock crops up. Their antagonists, equally determined to check them with portents of frightening probabilities, follow suit. Nigeria’s political class – the aggregation of traditional ruling families, the remnants of the 1960s ‘nationalists’, and the military-democratic complex – direct this show behind the curtains. Outwardly, the political class acts disinterested. 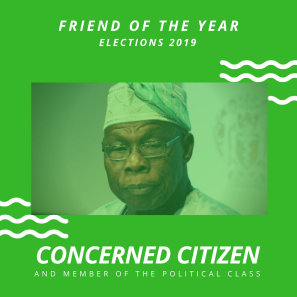 Still, this is also the time that Nigeria’s political elites reappear with a rediscovery of their political conscience. Feigning friendship for the masses and concerns for governance, they massage our sensibilities through open letters, public notices, words of advice, and similar expressions of ‘statesmanship’ and ‘concerned citizenship’.

But they present these interventions – to use the term generously – when their words have little or no value to actual governance. For example, the economy may already be in shambles or thousands of lives lost. For people who claim to care about governance, they wait until an administration is in ruins before speaking up. People who do care about governance are critical of the direction of an administration from the first day of its tenure. They engage its policies to prevent damage, and not just to give a post-damage score sheet.

But Nigeria’s political elites are more interested in politics than in governance. Immediately after an election, they fade into the background for some two to three years, distanced from policy directions and popular agitations. For example, in the last two years, Nigerians have died from terrorist attacks, militia attacks, military ‘accidents’, police brutality, political and election violence, road and transport accidents, deficient healthcare, migration accidents, deficient public utilities and infrastructure. Rarely did members of the political class speak up on these. They were mute when this administration lacked a cabinet, ordered an arbitrary monetary policy, ignored court orders, and failed to disclose the president’s health status.

READ THE REST in the originally published article here in my monthly column for The Guardian.
Also, watch my interview on this and related issues with Sahara Reporters:

One thought on “THE SILENCE OF ‘OUR FRIENDS’ | By Ayo Sogunro”