“I have just read a statement attributed to me on a news outlet, evidently one of the Internet infestations. My lecture at the Hutchins Centre, Harvard University, was video recorded. Anyone who believes what I am alleged to have said must be a moron – repeat, a moron. — Wole Soyinka

My close acquaintance—and one of my sparring partners on the fine points of philosophy—Kayode, has written a blog post here titled “Soyinka’s Morons” where he tried to identify the underlying import of Wole Soyinka’s reaction to a defamatory news story. In summary, Kayode identified “Soyinka’s morons” as “us intellectuals, the self-appointed defenders of Nigerian forthrightness, us overly keen to be seen as rational, detribalized – whatever that means – and politically correct” and who should know better than to believe any news about Wole Soyinka without considering his antecedents. Kayode has not been alone in this business of identifying “Soyinka’s morons”; both on and off social media, not a few people have been pointing fingers to the “moronic” on the basis of Wole Soyinka’s retort. This trend could easily be dismissed as our penchant for finger-pointing and blame-trading but, on further reflection, maybe we should try to do some justice to the words of the Professor.

[Meanwhile, here’s a happy picture of myself and the great man to keep my fellow Soyinka groupies satisfied about my continued loyalty to Soyinkaism. And no, he’s not asking if I’m a moron!] 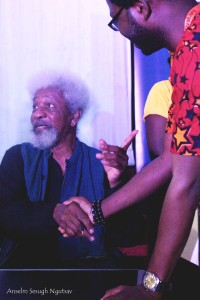 Like Kayode has suggested, not a few Nigerians went to town over Wole Soyinka’s alleged statements in an effort to appear “rational and detribalized—whatever that means”. But we shouldn’t knock the rational or the detribalized—whatever they may mean. Reason and objectivity are not our problems here. We have too little of those and we need more. Therefore, we should distinguish the intellectuals who attacked the alleged speech on grounds of its reasoning from the intellectuals who attacked the speech based on their negative perception of Wole Soyinka. The former category of persons are guilty, at worst, of judging the situation “too early”, for not having “faith” enough. Yet—and I say this with the full gravity of a dedicated Soyinka disciple—one is no more a moron for lacking faith in Wole Soyinka than one is for having little faith in Immanuel Kant or Paul the Apostle. On the other hand, the second type of “intellectuals”, pseudo-intellectuals in fact, are those whose criticisms had little to do with the validity or otherwise of the alleged speech and more do with the personality of the alleged author. These people are a problem. Their goals are simply to incite disrespect to the great man, and the alleged speech gave them an opportunity to wear the cloak of being “rational and detribalized” as a cover for their more primitive intentions. These folks will at the drop of a hat—or an alleged speech—cast stones at Soyinka. But then, are these people “Soyinka’s morons”? No. I think they are just morons in their own everyday right.

So, are “Soyinka’s morons” all the people who swallowed the false news story, hook, line, sinker, fisherman and boat? Well, I find it hard to criticise people for not immediately disbelieving a story from a news source they have always considered credible. Everybody reads the news from a source that suits his or her general perspective. We may easily criticise their choice of sources but, certainly, not their immediate belief in a particular story from a news source. In a world where the publication of a story is invariably becoming its own evidence of the truth of that story, most people will take a news story as fact until a retraction is published, or another story comes along to disprove the first one. And this behavioural attitude is consistent no matter how incredible the subject matter is—you could even say the more incredible the story, the more newsworthy it is, anyway. And so, here’s a whole speech credited to Wole Soyinka—not a quote, mind you, not a sentence—a full speech complete with time, date, venue and audience. In a fast-paced world of daily routine and personal worries, how does an average reader handle that type of information? A natural cynic may pick and choose news items, but not everyone is a natural cynic. But would Soyinka consider people as morons for their general belief in media that had hitherto been reliable? I don’t think the professor is that simplistic. No, the believers in the authenticity of the alleged speech are not “Soyinka’s morons”.

To buttress the foregoing point, it is trite that not everyone who believed the news story necessarily thought negatively of Wole Soyinka. Some folks read the news with mild interest and gave it no further thought. Some were outright supportive of the alleged speech—thereby validating their own irrational, tribal worldview, maybe? Some others (myself inclusive) were (intellectual Nigerians or not) confused by the alleged speech: it didn’t connect with their understanding of Wole Soyinka, but yet, it seemed irrational to ignore the “evidence” presented on paper. Still, others argued that Wole Soyinka had earned the “privilege” over the years—including the moral authority derived from his escapades in Biafra—to criticise any Nigerian ethnic group without it being deemed tribalism. So, could all these variety of reactions, especially from the “pro-Soyinka” faction, be considered “Soyinka’s morons” simply for not rejecting the news story without any (non-historical) basis for their rejection? I think not.

Who then is “Soyinka’s moron”?

The preceding sentence to the “moronic” quote provides ample premise. I believe “Soyinka’s moron” is “simply and squarely” the news editor(s) who—when handed the alleged speech—quickly took its authenticity for granted and published it to the world without a factual crosschecking. Soyinka considered their category as an “internet infestation”. A good editor ought to ask some questions: “Wole Soyinka actually said this at Harvard? Can we get someone else in the audience to verify this? Did Harvard publish a transcript that we can use?” etc., etc. But, instead, the editor(s) simply believed the story as received. This was the “believer” who turned his or her belief into a news story. This was the person whose job description required some critical assessment. This was the person who should have done the work of verifying the authenticity of the story before publishing it. And whoever that person was, whatever his or her intents may have been in approving a news story negligently—whether in order to be the first to publish a “scoop” or to vindicate some negative opinion about Soyinka—that person is “Soyinka’s moron”. Any other morons we go in search of are oxymoronic morons, mere justifications for our own biases, not execution of the Professor’s words.