At the risk of putting a dampener on your holiday festivities, here’s a quick reminder of how badly 2014 went. Of course, we’ll rather sweep all of this under Nigeria’s Big Rug of Forgetfulness, but now that the presidential campaign is in full swing with the achievements of Goodluck Jonathan’s administration in roads, bridges and other petty infrastructure, here’s a quick look at the worst tragic events, inane policies and unresolved issues that plagued us in 2014 alone.

1. The Continuing Boko Haram War which, insanely, is yet to be treated as a war. Instead, the Federal Government of Nigeria treats it as a mild annoyance while the military keeps pretending it’s a top secret experiment being conducted in the basements of Sambisa Forest. Meanwhile, tragic news from internally displaced persons tells of unbelievable horror: captured towns; wanton and brutal killings; extortion by terrorists. The year 2014 has been a kill-fest for Boko Haram: the Borno Massacre, Abuja and Kano bomb blasts, the sudden emergence of female suicide bombers, and terrorist flags raised over Nigeria territories: one would be forgiven to think that the terrorists have been handed a free pass across the North of Nigeria. There was a point in the year where it seemed that the Nigerian Army had got its game on and would soon rout the terrorists, but the Federal Government announced a one-sided “ceasefire” and, to put a cliché on it, “snatched defeat from the jaws of victory”. Boko Haram is currently the biggest headache in Nigeria—and it’s also the most ignored by the Presidency.

2. The Missing Chibok Girls have made international news through the #BringBackOurGirls campaign, suitably embarrassing the Presidency and gearing them to some half-assed attempt at damage control for their initial disregard. Even worse than the disbelief was the earlier lie pushed out by the military that they had recovered the girls—a statement that wrecked whatever little trust Nigerians had in the military. Meanwhile, the Presidency, either because of its unbelievable disconnect from the military or simply through general nonchalance, didn’t believe the girls were missing, that is, until the aforesaid international embarrassment. Afterwards, the President flew to France for a problem solving meeting and later met with members of the Chibok community (in deference to Malala’s wishes—we should add), and then—nothing. Honestly, nothing else. That’s all. The girls are still missing—some of them presumed dead.

3. Abba Moro and the Tragic NIS Recruitment is a story that should have shaken the foundations of public administration in a saner climate. But, not in Nigeria. How do you connect a public service recruitment exercise with the deaths of several people while making a truckload of money too? Leave it to Abba Moro, Minister of Interior. Bad enough that the Immigration Service charged money from potential government employees; bad enough that the recruitment exercise was badly planned and fatally executed, bad enough that Abba Moro was not sacked afterwards—but utterly shameful and irresponsible that the Federal Government didn’t even consider it an issue worth stressing about. There was no sense of shame or regret. Just a casual promise to find jobs for the injured and compensate relatives of the fatal victims—a promise which I understand is yet to be fulfilled. Yet, the same government lost no time in suspending a weekly Federal Executive Council meeting following the death of—wait for it—the Vice President’s brother.

4. That Embarrassing Centenary Celebration would have been deeply hilarious if it wasn’t also a tragic reflection of the distance between the federal government of Nigeria and the reality of millions of everyday Nigerians. This was at a time when the country was in a sour mood and nobody was looking to a national celebration. But, by heavens, the Presidency was determined to party—and party it did. It ran amok with the celebrations and dashed imaginary awards to everyone who ever slept in a government house. Just to rub this indiscretion in the noses of Nigerians properly, the Abachas were also invited to dine. And that’s when even Jonathan’s supporters started to worry about the quality of his advisers.

5. A National Conference or Something Like That, which, to be frank, was neither national nor was it a conference: more like a cross between a political party conference and a bucket list for old men. The President wanted to impress some intellectuals, maybe, but all it featured was a couple or so brilliant speeches and a lot of puzzling fights. We really don’t know where the report by the Conference is headed or what benefit it has conferred on Nigeria. In short, the Conference was another brainwave of the GEJ administration that just didn’t make much sense. The best I can say is this: it started too quickly and ended too late.

6. Twenty Billion Dollars and other Sorry Tales: we all learnt a lot about numbers this year. I learnt that you can host a magnificent World Cup with thirteen billion dollars or thereabouts—ask Brazil. Which is why it’s puzzling that a figure even in excess of that amount could lose its way to the Federation Account and nobody in Aso Rock bothered to send out a search team. Well, the erstwhile governor of the Central Bank tried to raise an alarm and we all saw the President come on TV to insult the man’s intellect on the premise that a man who mistook a mere case of “stealing” public funds for one of “corruption” was unfit to be a central bank governor. A new governor was promptly appointed and that leads to the next point.

7. Rebased, Reserved, Revalued aka Economics, Economics and more Economics. Look, I’m not quite sure any single person in Nigeria can tell you exactly what the hell is going on with the Nigerian economy. First, the economy was rebased in what was supposed to translate into “Nigeria has more money circulating in its industries than we realized” and next, we learnt that our external reserve was going down faster than a belly dancer, and before we could comprehend that imagery, we saw the naira go down even faster against the dollar. All of this in 2014. Till date, the President has not told us what these economic travails mean and how he plans to handle it (except you count the dismissive explanations set out in the 2015 budget). Meanwhile, the new CBN governor has politely asked for a sixty-five naira ATM fee to save banks the trouble of stealing it directly from your account.

8. The Signing of the “Anti-Gay” Law was another indication of the total lack of seriousness by the Federal Government of Nigeria. Not content with dismissing the menace of Boko Haram across the country, the legislators and the executive decided to focus on the singular most important issue bothering all Nigerians today: the lives of gay and lesbian folks getting married in America and Europe.

9. The Military Went Gaga and not against Boko Haram—we’re all for the military going gaga against Boko Haram within the rules of engagement. Instead, newspaper bundles and public buses got a hard year from military onslaught. Front pages were slashed, trucks were waylaid, and buses were set ablaze. When all that fighting had settled for a while, the military suddenly resurrected their death penalty court-martial—not to shoot the soldiers burning buses and newspapers—but to shoot the soldiers fighting an ill-equipped war. And in all these things, the Presidency said nothing but focused squarely on running down the opposition party.

10. The Year of All the King’s Men: The President must have picked up on the criticisms that, maybe, too many women were running the government and we needed some gender balance. So, enter Oritsejafor, Alamieyeseigha, Tompolo, Dokubo, Obanikoro, Femi Fani-Kayode and so on and so forth. Of course, we’ve always had the usual suspects: Okupe, Maku and Abati. But this year was big for the new names: Oritsejafor got to run interference, Alamieyeseigha got a pardon, Tompolo got some warships, Obanikoro got to monitor state elections, and Dokubo got more Dokubo. And so 2014 was a great year for presidential retorts and responses and reactions. GEJ always had a comeback for every idle comment and serious criticism. You could actually hear El-Rufai’s silence—and even Amaechi took a breather.

Ayo Sogunro is the author of Everything in Nigeria is Going to Kill You. A lawyer by profession, he also indulges in socio-legal philosophy on this blog. Interact with him on Twitter via @ayosogunro. 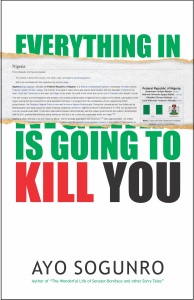